William Penn, (born October 14, 1644, London , England—died July 30, 1718, Buckinghamshire), English Quaker leader and advocate of religious freedom, who oversaw the founding of the American Commonwealth of Pennsylvania as a refuge for Quakers and other religious minorities of Europe.

William was the son of Admiral Sir William Penn.  He acquired the foundations of a classical education at the Chigwell grammar school in the Essex countryside, where he came under Puritan influences.  After Admiral Penn’s naval defeat in the West Indies in 1655, the family moved back to London and then to Ireland.  In Ireland William heard Thomas Loe, a Quaker itinerant, preach to his family at the admiral’s invitation, an experience that apparently intensified his religious feelings.  In 1660 William entered the University of Oxford, where he rejected Anglicanism and was expelled in 1662 for his religious Nonconformity.  Determined to thwart his son’s religiosity, Admiral Penn sent his son on a grand tour of the European continent and to the Protestant college at  Saumur, in France, to complete his studies.  Summoned back to England after two years, William entered Lincoln’s Inn and spent a year reading law.  This was the extent of his formal education. 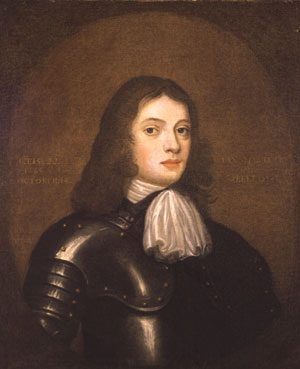 In 1666 Admiral Penn sent William to Ireland to manage the family estates. There he crossed paths again with Thomas Loe and, after hearing him preach, decided to join the Quakers (the Society of Friends), a sect of religious radicals who were reviled by respectable society and subject to official persecution.

After joining the sect, Penn would eventually be imprisoned four times for publicly stating his beliefs in word and print.  He published 42 books and pamphlets in the seven years immediately following his conversion. In his first publication, the pamphlet Truth Exalted (1668), he upheld Quaker doctrines while attacking in turn those of the Roman Catholics, the Anglicans, and the Dissenting churches.  It was followed by The Sandy Foundation Shaken (1668), in which he boldly questioned the Trinity and other Protestant doctrines.  Though Penn subsequently qualified his anti-Trinitarianism in Innocency with Her Open Face (1669), he was imprisoned in the Tower of London, where he wrote his most famous book, No Cross, No Crown(1669).  In this work he expounded the Quaker-Puritan morality with eloquence, learning, and flashes of humour, condemning the worldliness and luxury of Restoration England and extolling both Puritan conceptions of ascetic self-denial and Quaker ideals of social reform.  No Cross, No Crown stands alongside the letters of St. Paul, Boethius’s Consolation of Philosophy, and John Bunyan’s Pilgrim’s Progress as one of the world’s finest examples of prison literature.  Penn was released from the Tower in 1669.

Penn’s close relations with James brought him under a cloud when William and Mary came to the throne, and for a time he was forced to live virtually in hiding to avoid arrest.  He used this period of forced retirement to write more books.  Among them were An Essay Towards the Present and Future Peace of Europe (1693), in which he proposed an international organization to prevent wars by arbitrating disputes, and A Brief Account of the Rise and Progress of the People Called Quakers (1694), which was the earliest serious effort to set down the history of the Quaker movement.  Penn also drafted (1696) the first plan for a future union of the American colonies, a document that presaged the U.S.  Constitution.

In 1696, his first wife having died in 1694, Penn married Hannah Callowhill, by whom he had seven children, five of whom lived to adulthood.  Meanwhile, affairs had been going badly in Pennsylvania.  For about two years (1692–94), while Penn was under suspicion, the government of the colony had been taken from him and given to that of New York.  Afterwards, Pennsylvania’s Assembly quarreled constantly with its Council and with Penn’s deputy governors.  The “lower counties” were unhappy at being unequally yoked with the larger province of Pennsylvania.  Relations with the home government were strained by the Quakers’ conscientious refusal to provide military defense.  In 1699 Penn, his wife, and his secretary, James Logan, returned to the province.  He settled many of the outstanding difficulties, though he was compelled to grant the Pennsylvania Assembly preeminence in 1701 in a revised constitution known as the Charter of Privileges.  He also allowed the lower counties to form their own independent government.
After less than two years Penn’s affairs in England demanded his presence, and he left the province in 1701, never to see it again.  He confided his Pennsylvania interests to the capable hands of James Logan, who upheld them loyally for the next half century.Penn’s final years were unhappy.  His eldest son, William, Jr., turned out a scapegrace.  Penn’s own poor judgment in choosing his subordinates (except for the faithful Logan) recoiled upon him: his deputy governors proved incompetent or untrustworthy, and his steward, Philip Ford, cheated him on such a staggering scale that Penn was forced to spend nine months in a debtors’ prison.  In 1712, discouraged at the outcome of his “holy experiment,” Penn began negotiations to surrender Pennsylvania to the English crown.  A paralytic stroke, which seriously impaired his memory and dulled his once-keen intellect, prevented the consummation of these negotiations.  Penn lingered on, virtually helpless, until 1718, his wife undertaking to manage his proprietary affairs.  Penn’s collected works were published in 1726.