John Woolman, a well known Quaker abolitionist, was born in 1720 in Burlington County, New Jersey.  Woolman served as a minister of Burlington Monthly Meeting in West Jersey.  He married Sarah Ellis and had one daughter.  Woolman felt that slaveholding was inconsistent with Christianity and spent his life traveling, observing and advocating against slavery.

Woolman began to question and speak out against slavery while working as a scribe.  His employer instructed him to write the bill of sale for a slave.  Despite being troubled by this Woolman wrote the bill of sale “but at the executing of it I was so afflicted in my mind, that I said before my master and the Friend that I believed slave-keeping to be a practice inconsistent with the Christian religion” (Woolman’s Journal, p. 15).

In the year 1746 Woolman spent time traveling with Isaac Andrews through Virginia, Maryland, and North Carolina observing slavery firsthand.  He wrote his essay “Some considerations on the keeping of Negroes” protesting slavery on religious grounds.  He held onto this essay for some years and in 1754 the Philadelphia Yearly Meeting approved its publication.  Unlike many of Woolman’s predecessors in the antislavery movement Woolman took a gentler approach more accepted by the Philadelphia Yearly Meeting.  He does not directly attack slave holders but stresses equality. Philadelphia Yearly Meeting Friends published their own antislavery paper “Epistle of Caution and Advice”, 1754 urging against the buying and keeping of slaves.

1755 the Philadelphia Yearly Meeting ordered that members who imported slaves or purchased them locally should be admonished.  Woolman again travelled to Virginia Maryland and North Carolina, but this time to visit with families of slaveholding Quakers.  By 1758 there was a ban on buying and selling slaves, and Philadelphia Yearly Meeting required members who bought slaves to be removed from positions of authority.

As early as 1762 Woolman and others refused to purchase goods produced by slave labor.  It was not until 1826, that Free Produce caught on as a movement.  Benjamin Lundy of Baltimore opened a store that sold only “free produce” and in 1827 the “Free Produce Society” was founded by Thomas M’Clintock and others in Philadelphia, Pennsylvania.

On a trip to England in 1772 John Woolman died of smallpox.  Two years after his death his Journal was published.  Four years after Woolman’s death slave ownership among Friends was finally prohibited. 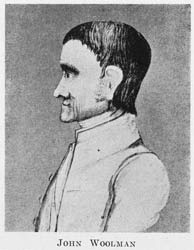