The Brintons were a Quaker family from Staffordshire County, England.  William Brinton, Sr. (1635-1699) with his wife and son came to America in 1684 to escape religious persecution.  The family of three anchored near what is now New Castle, Delaware, and lived in a cave through the first winter.  The following summer, they built and settled in a cabin on some of William Penn’s land near West Chester, Pennsylvania.  Several years later, son William built the 1704 House (pictured here) on an adjoining part of the land.

Their daughters and their families, who had been left behind in England, subsequently emigrated to this area.  Howard Haines Brinton was a descendent. 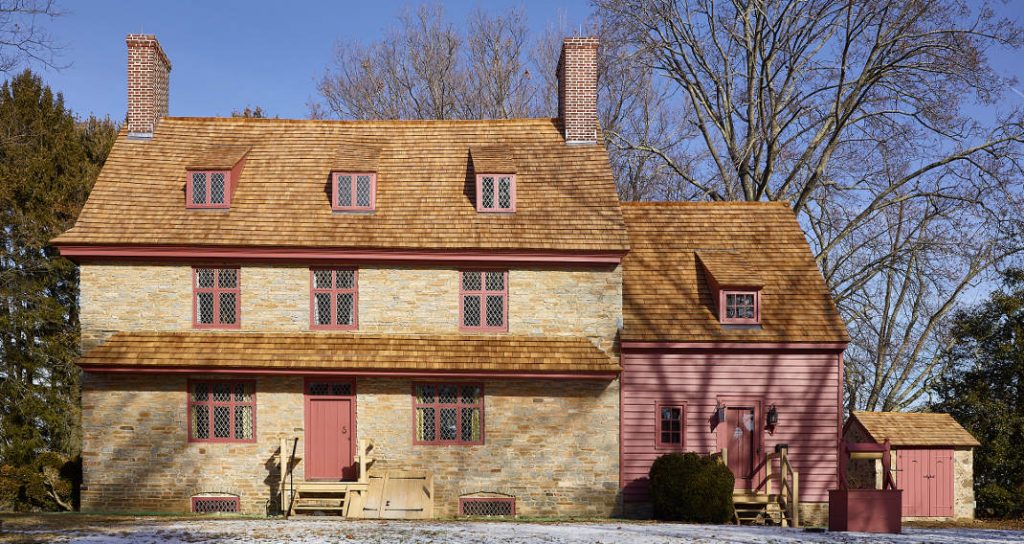 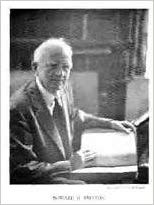 Howard Haines Brinton (1884–1973) was an author, professor and director whose work influenced the Religious Society of Friends movement for much of the 20th century.  His books ranged from Quaker journal anthologies to philosophical and historical dissertations on the faith, establishing him as a prominent commentator on the Society of Friends.

He was born on 24 July 1884, in West Chester, Pennsylvania, to a Quaker family.  He studied at Haverford College with Rufus Jones and graduated in 1905, obtaining a master’s degree in 1906.  He taught at Olney Friends School in Barnesville, Ohio, and at  Pickering College in New Market, Ontario.  In 1909, he obtained a doctorate in Physics from Harvard.

In 1916, he was appointed acting President of Guilford College, North Carolina.  During his presidency, he visited conscientious objectors imprisoned at Camp Jackson, South Carolina; the prisoners were not permitted to communicate with outside and their location was not known to their relatives and friends

This visit inspired him to join, in 1919, the American Friends Service Committee, which allowed Quakers and other pacifists to serve during wartime in nonviolent means.  It also co-ordinated relief to the victims of war.

He witnessed the chaotic consequences of war in Upper Silesia.  That experience influenced his work as a pacifist speaker and writer in the 1920s and 1930s.  It was during this period that he met Anna Shipley Cox (19 October 1887 – 28 October 1969), who also worked in Europe for AFSC.  They married when he returned to the United States on 25 July 1921.

In 1925, he obtained a doctorate in Philosophy from the University of California while Anna taught at Mills College.  Then they moved to Earlham College in Indiana, where both taught and their first three children were born.  In 1929, they returned to California, where their fourth child was born and both taught at Mills.

In 1931, they spent a year in England at Woodbrooke Quaker College in Birmingham.

In 1936, Howard and Anna became co-directors at the Pendle Hill religious center in Wallingford, Pennsylvania.  Brinton used this opportunity to produce over a dozen books and pamphlets dealing with Quakerism.  Ironically, one of his most productive writing periods came during World War II, during which he published the widely used “A Guide to Quaker Practice.”.

In 1949, Anna Brinton left Pendle Hill to work with AFSC.  Howard continued until 1952, when he retired and the couple moved to Japan, in AFSC service.  They returned to Pendle Hill in 1954.  Howard’s Japanese secretary, Yuki Takahashi, a widow, returned with them to help her employer write his memoirs, which have never been published.  In May 1972, the nearly blind and aged Brinton, having obtained consent from his adult children, surprised everyone by marrying Takahashi.

He died on 9 April 1973 and is buried at Oakland Friends Cemetery, West Chester, Pennsylvania. 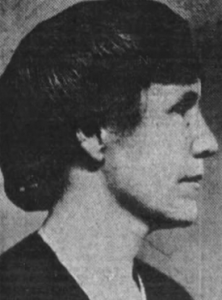 She was born in San Jose, California, the daughter of Charles Ellwood Cox and Lydia S. Bean Cox, and the granddaughter of Quaker leader Joel Bean.  She attended Westown School and completed both undergraduate work and doctoral studies at Stanford University, in 1909 and in 1917, respectively.

Brinton was a professor of archaeology and art history, on the faculty at Mills College, also teaching Latin and Greek at Mills and subsequently was head of the classics department at Earlham College in Indiana (1921 to 1928).  In 1921, she married Harold Haines Brinton, with whom she had four children.

She was a delegate to the Pan-Pacific Women’s Conference in Hawaii in 1930.  In 1931 and 1932, she held a Woodbrooke Fellowship, for advanced studies at Selly Oak College in England.

She was active with the AFSC for decades, serving on the organization’s board from 1938 to 1965. After World War I, she went to Silesia with the organization’s child feeding program.  In 1936, the Brintons were named co-directors of the Pendle Hill Quaker Center.  She was the AFSC’s Commissioner for Asia from 1948.  In 1952, the Brintons went to Japan with the AFSC, to direct Quaker postwar relief work in Tokyo.  In the 1960s, she was president of the Friends Historical Association, and wrote and edited a number of works on Quakerism.